A sense of love and pride for samurai culture. Such feelings may have been lost in many parts of Japan, but here in Kumamoto, they are still very much alive and thriving. Spring is a fantastic season to experience this samurai culture and feel the locals appreciation towards it. Thanks to the spring festivals, we can experience traditional culture that normally remains invisible in everyday life.

One festival that brightens up spring in Kumamoto is the Izumi Shrine Spring Festival (reitaisai). Reitaisai is the Japanese term for a special festival held once or twice each year on designated days at shrines (which are dedicated to the gods of Shinto, Japan’s native religion). At Izumi Shrine, such festivals are held twice annually, in spring and fall. 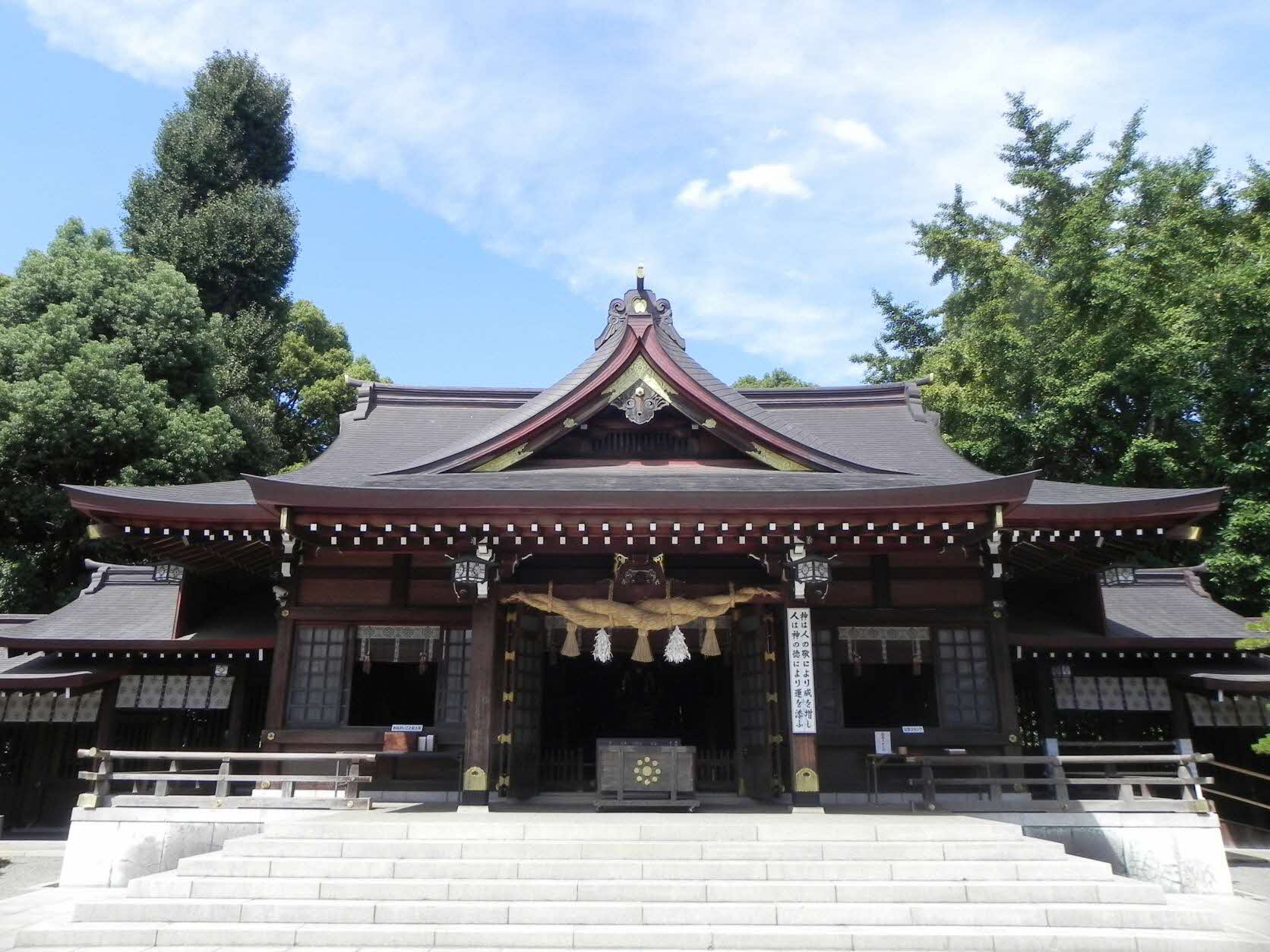 This shrine is dedicated to the lords of the Hosokawa family, who ruled Kumamoto for 240 years during the samurai era. It was built in 1878 by former vassals of the Hosokawa family when the reign of the samurai came to an end, and Japan commenced its journey to become a modern nation. The shrine is located in a garden called Suizenji Joju-en, famous for its design from the early period of samurai culture and its beautiful springwater pond. The word izumi means spring water, from which the local area takes its name. 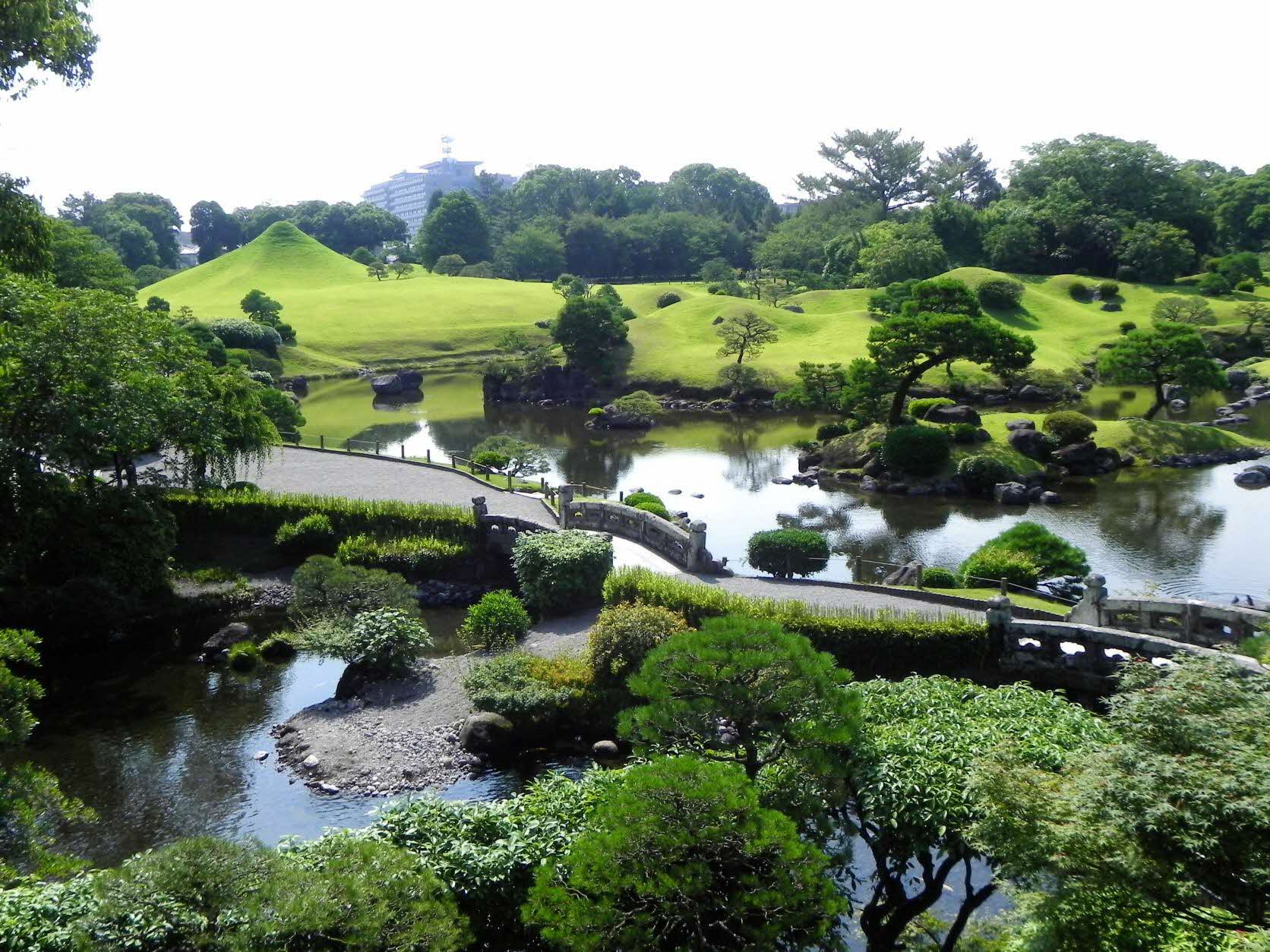 It is truly symbolic that the Hosokawa family, former feudal lords still much loved by the people of Kumamoto, are enshrined in this garden, which is filled with beautiful spring water, unchanged since its construction in the 17th century. The Hosokawa family produced some of the greatest cultural figures—not to mention warriors—of their time. Many of them showed great talent in tea ceremony, poetry, and landscaping, and Suizenji Joju-en Garden was created by successive generations of lords of the Hosokawa family. The Izumi Shrine Spring Festival is held at Izumi Shrine and Suizenji Joju-en Garden, and as befits a shrine dedicated to the lords of the Hosokawa family, who excelled both at the arts and warrior culture, traditional samurai cultural events such as Nohgaku theater, the kencha tea ceremony, and yabusame (archery on horseback) are still held here. 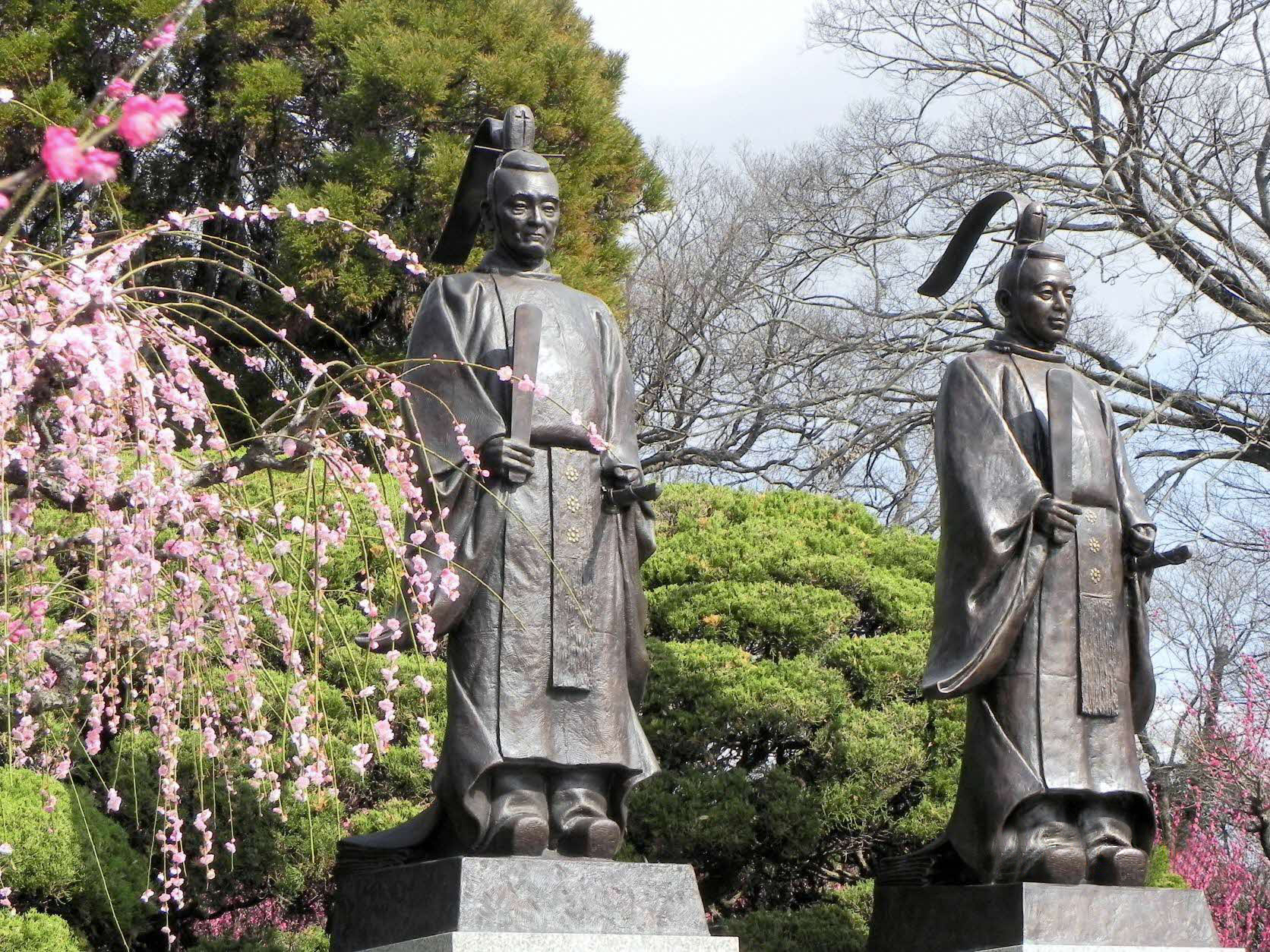 Nohgaku theater is a form of traditional Japanese masked musical drama that is listed as an Intangible Cultural Heritage by UNESCO. It has a history of 600 years, and was significant in the samurai era as a formal entertainment for ritual ceremonies. The kencha tea ceremony is a form of etiquette established in the samurai era, said to spring from the custom of offering tea to nobles, but in modern times, it has come to mean an offering of tea to Buddha and Shinto deities during religious ceremonies. Yabusame (horseback archery) is a ritual in which three targets are shot with a bow from atop a galloping horse in order to pray for peace in the land, good health, and a bountiful harvest. The origin of this ceremony is said to be ancient, predating the establishment of samurai culture, but it became more widespread with the advent of samurai culture. 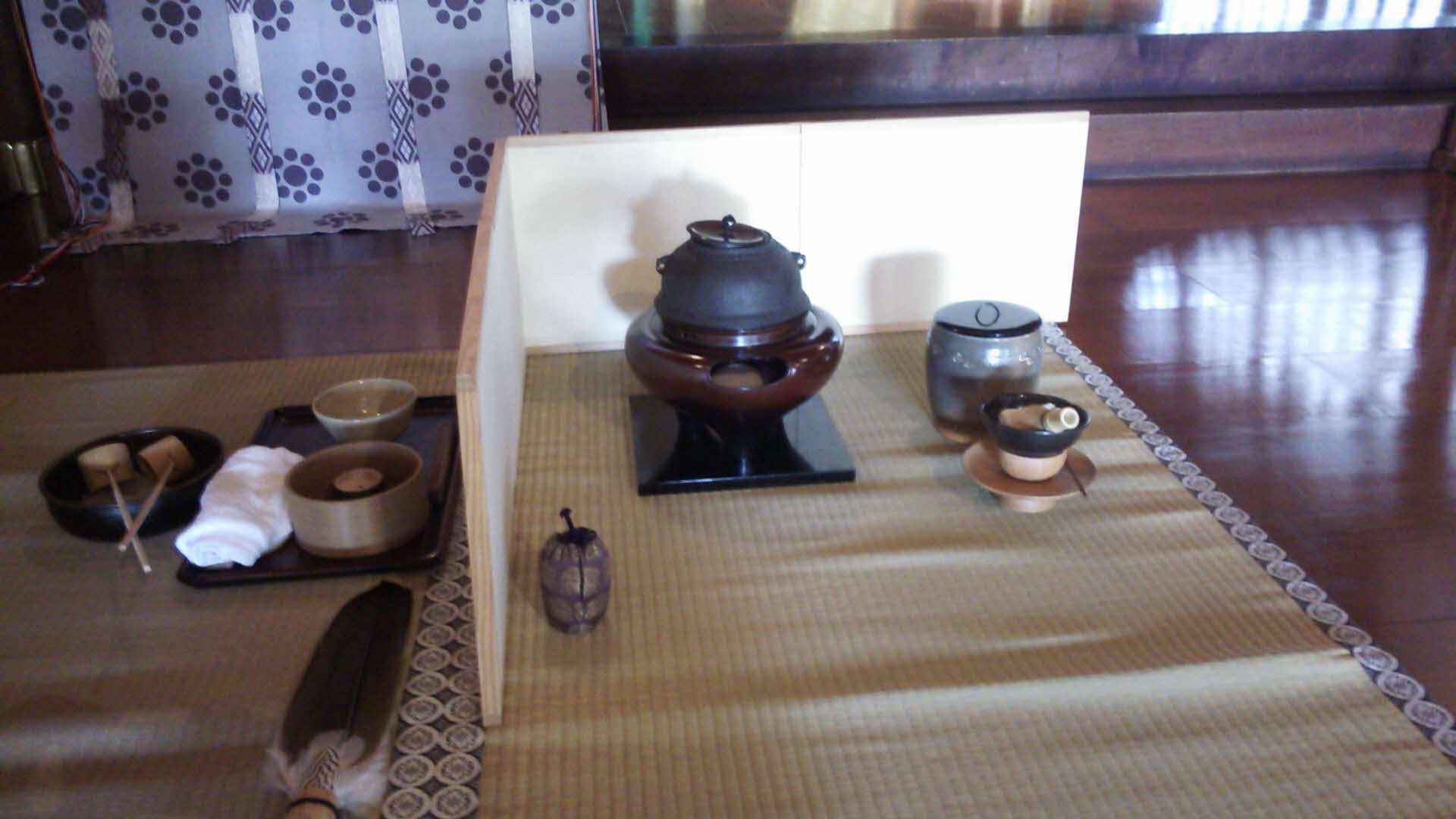 Nohgaku theater, the kencha tea ceremony, and yabusame (archery on horseback) are all widely performed at events and rituals throughout Japan, but the history of yabusame has a very special meaning for the Izumi Shrine Spring Festival. There are two major schools of yabusame horseback archery, Takeda-ryu and Ogasawara-ryu, which have each been around for about 1100 years. One of these, Takeda-ryu, has been passed down from generation to generation by the Hosokawa family and their retainers. If you have read this far, you will most likely understand the value of witnessing yabusame, which is widely performed at events and rituals throughout Japan, as well as Nohgaku theater and the kencha tea ceremony, here at Izumi Shrine in Kumamoto. 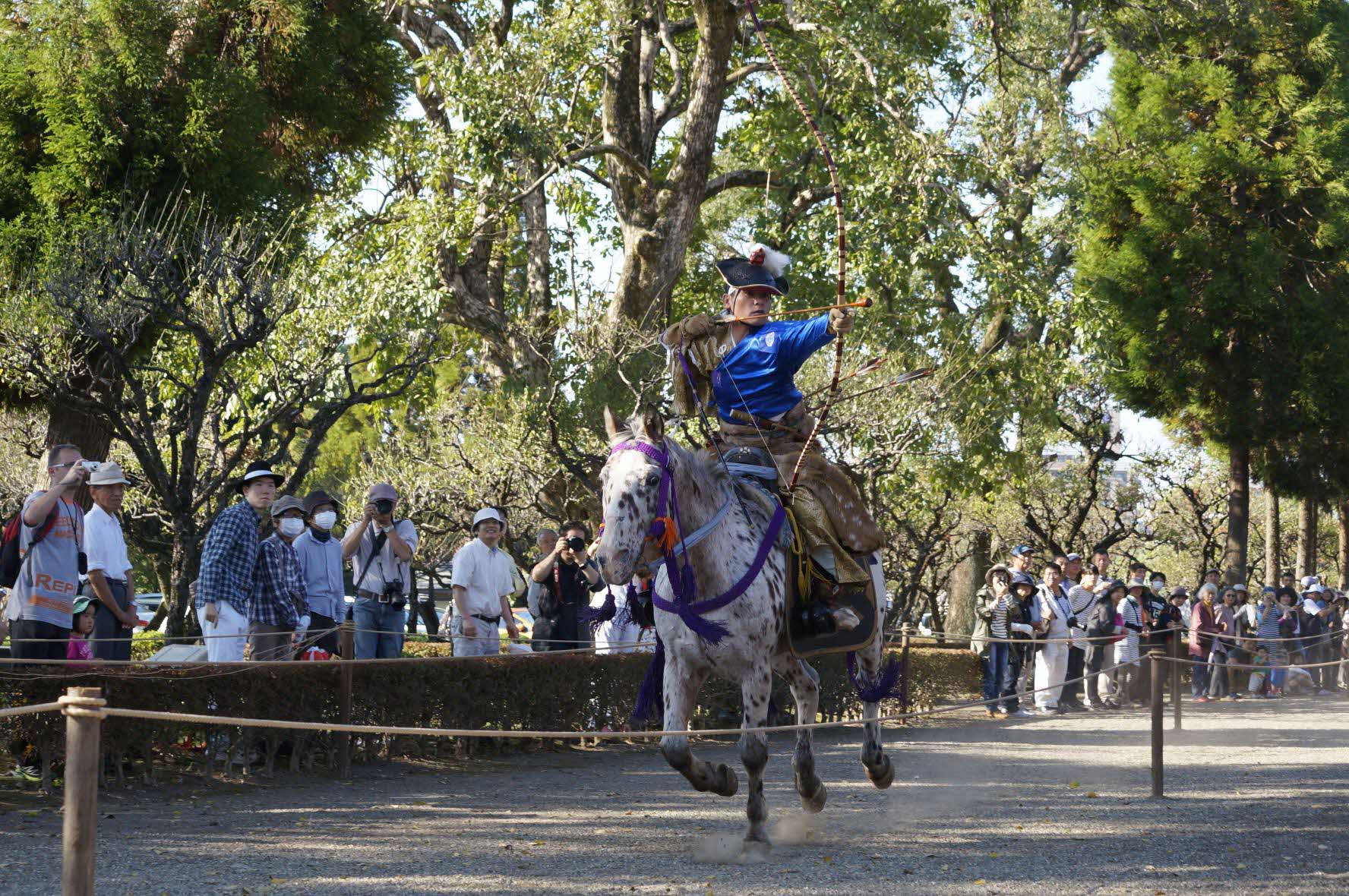 The annual Izumi Shrine Spring Festival is held for three days starting April 22, with a focus on dedicated cultural events passing down a deep regard for samurai culture. In recent years, it is common occurrence that Japan’s festivals are canceled due to the COVID-19 pandemic. Nevertheless, this festival continues to be an important event for the people of Kumamoto to renew their love and pride for the culture of the samurai, and for visitors from outside Kumamoto to witness the spectacular cultural heritage passed down by the samurai, who continue to be loved here. It is our hope that one day, all people will be able to feel the living breath of this wonderful samurai culture once more.